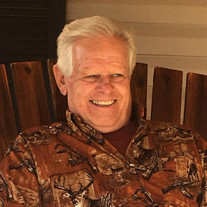 Funeral services For Milton “Thomas” Jayroe, age 78, of Philadelphia, will be at 10:00 on Thursday, April 21, 2022 at John E. Stephens Chapel. Thomas passed away on Sunday, April 17, 2022. Dr. Billy James and Bro. John Stephens will officiate the service. Burial will be at Bethsaida Baptist Church Cemetery in Philadelphia, MS. John E. Stephens Chapel will direct. On June 22, 1943, in Philadelphia, MS a baby boy was born to farmer, Willis Talmadge Jayroe and his spunky wife, Zanie Yvonne. He was named Milton Thomas Jayroe after his grandfathers. Thomas was the second of five siblings. One day at the young age of 17, he decided he’d had enough of school and cotton fields and bravely joined the Army to serve his country for three years as a military policeman in Georgia, USA and Frankfort, Germany. He was honorably discharged from the Army on December 9, 1963. Shortly after, Thomas met his beautiful wife, Charlotte Beckham, on December 25, 1963 at her grandparents’ home and began what he called a “ red-hot romance”. They married November 20, 1964. Together they had three beautiful daughters, Savonna Kaye, Tarla Ann, and Valerie Lane. He worked at R.G. LeTourneau in Vicksburg, MS 1964-1973 where the family lived. He then joined Pipe-fitters and Plumbers Local #619 in Vicksburg working mainly at Grand Gulf Nuclear Plant until his retirement. During this time the family resided in Delhi, LA from 1974 to 1983, then he moved his family back home to Philadelphia where they settled. He excelled in his career as a plumber/welder/pipe fitter and held supervisory positions in these areas. Providing for his beloved family was always his utmost priority, and in addition to his career, did so using his many skills as a mechanic, fisherman, hunter, cattleman, and farmer. Thomas was devoted to his family and loved our Lord and Savior. He was a member of Bethsaida Baptist Church, Golden Grove Masonic Lodge #323, and Hamasa Shriners of Meridian. When he retired from work, he enjoyed traveling “out west” with Charlotte and friends on several occasions. Thomas treasured being with family and friends. His most enjoyable pastime was being on his favorite red clay hill in Tucker tinkering with vehicles, gardening, horse-riding, bee-keeping, deer-hunting, motorcycle riding, maintaining his family land, and visiting neighbors. This kept him busy, which is what he wanted to be! He and Charlotte enjoyed a brief residence near Jamestown, TN where they made great friends, rode horses and enjoyed God’s beautiful creation. Thomas was known for his hardworking morals, straightforward personality, sarcastic humor, fearless attitude, and intelligence of common sense. He was preceded in death by his parents, Willis and Zanie Jayroe; baby brother, Bobby Jayroe; and baby sister, Inez Mott. He is survived by his beloved wife of 57 years, Charlotte; three daughters, Savonna (Robert) Mikell, Tarla (Keith) Page, and Valerie (Tan) Watkins; five grandchildren, Dinnon (Megan) Breazeale, Neylie Breazeale, Avery (Erica) Lovern, Konner Lovern, and Jude Watkins; two great-granddaughters, Daisy and Vada Lovern; brother, Tony Jayroe; sister, Ruth Whitehead; uncle, Pat (Milbur) Posey; and a host of step-grandchildren, step-great-grandchildren, nieces, nephews, and cousins. The family will receive friends from 5:00 to 8:00 on Wednesday, April 20, 2022 at John E. Stephens Chapel.

The family of MR. THOMAS JAYROE created this Life Tributes page to make it easy to share your memories.

Send flowers to the JAYROE family.