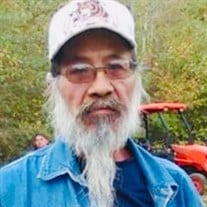 Thaddeus Hickman, Sr., also known as “Chip,” was born on September 9, 1955, to the late Willie Hickman and Mabel Bell Jackson. He was called to start his new journey with the Lord on Wednesday, June 9, 2021, at the Choctaw Health Center in Choctaw, MS. He was blessed with 65 years of life he shared with us. Thaddeus Sr. was raised in the Bogue Chitto Community. He attended Bogue Chitto Elementary School then Choctaw Central High School where he graduated in 1974. He worked with Chotin Riverboat Company in Baton Rouge, LA for 9 years and Choctaw Tribal Maintenance for 7 years as a custodian. Thaddeus Sr. enjoyed spending time with his family and friends. He shared countless laughter and joyful memories. He loved playing on “The Million Man Team” - Bok Cito (with his favorite goggles). He considered the team his inspiration, his family. Thaddeus Sr. was a very independent person with a strong-willed attitude and witty and carefree personality. He always found the good in a bad situation and always found laughter through it. He loved performing Choctaw Social Dances, especially the House Dance during the Choctaw Indian Fair and Spring Festivals. He also enjoyed playing the guitar, along with the late fiddler Albert Frazier. He was preceded in death by a special companion, Barbara Clemons; parents, Willie Hickman and Mabel Bell Jackson; two sons, Jason Bell and Garrison Jim; an infant grandchild Jim; two sisters, Willie Mae Hickman and Sylvia Wimberly; four brothers, Jeffery Hickman, Leonard Hickman, Darryl Hickman, and Flavion Hickman; a niece, Sequita Dixon; and nephews, Brandon Billie and Bronson Bell. Thaddeus Sr. leaves behind in God’s care his four daughters, Alyssa Hickman, Tasha Dawn Bell, Keahna Lewis, and Talisha Bell, all of the Bogue Chitto Community; four sons, Alan Jimmie of the Pearl River Community, Shane Bell, Sr., Nekota Bell, and Thaddeus Hickman, Jr., all of the Bogue Chitto Community; four sisters, Donna Williams and Flora Billie, both of the Bogue Chitto Community, Angela John of Philadelphia, MS, and Deborah Lewis of the Standing Pine Community; brother, Jerry Lewis Hickman of the Bogue Chitto Community; 18 grandchildren, 10 great-grandchildren, and a host of nieces, nephews, relatives, and friends. Thaddeus Sr. was very much respected and loved by his family and friends. He never met a stranger and he will be greatly missed by everyone who knew him. Until we meet again, Rest in Peace.

Thaddeus Hickman, Sr., also known as &#8220;Chip,&#8221; was born on September 9, 1955, to the late Willie Hickman and Mabel Bell Jackson. He was called to start his new journey with the Lord on Wednesday, June 9, 2021, at the Choctaw Health... View Obituary & Service Information

The family of Mr. Thaddeas Chip Hickman Sr. created this Life Tributes page to make it easy to share your memories.

Send flowers to the Hickman family.