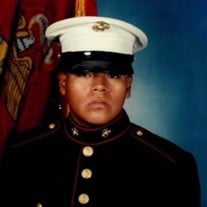 Funeral service for Mr. Michael Nita-Osi Willis will be held at 2 PM Friday, April 29, 2022 at Hope Indian Baptist Church with Rev. Carl Wilson and Rev. Tim Tubby officiating. Interment will be in the Church Cemetery. Visitation will begin at 10 AM Wednesday, April 27, 2022 at 143 Pine Ridge Road. John E. Stephens Chapel is in charge of arrangements. Michael Nita-Osi Willis was born on May 7, 1980 at the University Medical Center in Jackson, MS. After suffering a heart attack in his sleep on Monday, April 19th, Michael Willis succumbed to complications from his battle with diabetes and entered into eternal rest on Saturday April 23, 2022 at the Singing River Hospital in Ocean Springs, MS. He was 41 years old. Michael lived most of his life in Pascagoula, MS although he lived for a time in both Shiprock, NM and Choctaw, MS. He graduated from Pascagoula High School in 1999 and entered the U.S. Marine Corp in August of the same year. He served with distinction receiving numerous recognitions for marksmanship, good conduct, achievement, and sea service. He was honorably discharged on August 29, 2003, and returned Choctaw, MS to work at American Greetings briefly before returning home to work at First American Printing, in Ocean Springs, MS and later SORG Printing and Direct Mail in D‘Iberville, MS where he was employed at the time of his death. He especially loved being with his children Breanna and George in Pascagoula, though he often returned to Choctaw, MS to visit family. He was an avid reader of science fiction, fantasy, and graphic novels. He also enjoyed playing video and board games. His favorite characters included the Marines from Warhammer 40,000 and Axton from Borderlands2. He was the son of Rev. Travis Willis, of Choctaw, MS and Florine Cambridge, of Shiprock, NM. He was preceded in death by his mother, his maternal grandparents Harris Cambridge, Sr. and Irene Mae Cambridge, his paternal grandparents, Claude Yates Willis and Gladys Mae Willis, and numerous aunts, uncles and cousins. He is survived by his children, Breanna Willis and George Yates Willis, his brothers and sisters, Kevin Tubby of Choctaw, MS, Rylan Harrison and Regina Cambridge of Shiprock, NM, and Travina Maye Harrison of Pascagoula, MS, his father Rev. Travis Willis, his stepmother, Fannie Willis, his step brothers Jason and Kevin Grisham and a host of family and friends both here in Choctaw and on the Mississippi Gulfcoast. Pallbearers are Jason Grisham, Kevin Grisham, Ricky Edwards, Shaun Seales, Billie Hockett, Jr., Barry Jim, Jr., Chris Jim, Andrew Sockey.

Funeral service for Mr. Michael Nita-Osi Willis will be held at 2 PM Friday, April 29, 2022 at Hope Indian Baptist Church with Rev. Carl Wilson and Rev. Tim Tubby officiating. Interment will be in the Church Cemetery. Visitation will begin at... View Obituary & Service Information

The family of MR. MICHAEL NITA-OSI WILLIS created this Life Tributes page to make it easy to share your memories.

Funeral service for Mr. Michael Nita-Osi Willis will be held...

Send flowers to the WILLIS family.