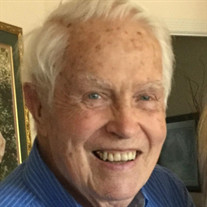 Gerald “Jerry” Dodd Brister, Sr. passed into eternal peace on Monday, September 21, 2020 at his home in Brandon, Mississippi. He was 85 years old. Born on December 17, 1934 in McCondy, Mississippi, he was the son of John and Lola Dodd Brister. He is survived by his wife, Clara “Polly” Wells Brister, son, Gerald “Dodd” (Nancy) Brister, Jr., daughter, Kim Brister (Tim) Rooks, and five grandsons, Daniel Hayes Brister, Sam Rooks, Max Rooks, Abner Brister, and Luke Rooks. He was preceded in death by his parents and brother, John Brister, Jr. Following two years of junior college, he enlisted in the U.S. Army and served two years in Iceland. After his time in the Army, he attended Mississippi State University utilizing the G.I. Bill. Jerry graduated with a degree in Mechanical Engineering in 1959. On February 23, 1961, he married Clara “Polly” Wells and together they shared a loving wonderful life for 59 years. After time with Mobil Oil in Texas and the birth of their two children, they moved to Bogalusa, Louisiana where he joined Gaylord Container Corporation in 1966 and worked in several different capacities until his retirement in 1996. Once retired, they moved to Brandon, Mississippi to be closer to their children and their families. His life exemplified his strong faith, commitment to family and friends, and a ready willingness to serve and help others. Jerry was a long-time member of Elizabeth Sullivan Memorial Methodist Church in Bogalusa where he served on the board, taught Sunday School, and was very involved with the youth and Scouting. He was also a member of the Masonic Order Center Lodge #244. After relocating to Brandon, he was a member of Saint Mark’s United Methodist Church. Jerry had many interests including hunting, fishing, golf, coin collecting, and genealogy. In addition, he especially enjoyed travelling with Polly and anything to do with his children and grandchildren. John E. Stephens Chapel in Philadelphia, Mississippi is in charge of arrangements. Respecting his wishes and Covid-19 guidelines, a private family graveside service will take place at Cedar Lawn Cemetery in Philadelphia. Pallbearers will include Tim Rooks, Sam Rooks, Max Rooks, Luke Rooks, Daniel Hayes Brister, and Abner Brister. The family wishes to thank and gratefully acknowledge caregivers Aeniqua Cooper, Comfort Keepers, Kendra Booker, and Kindred Hospice for all their kind and compassionate care. In lieu of flowers, memorials may be made to St. Mark’s Methodist Church, 400 Grants Ferry Road, Brandon, MS 39047 or St. Jude Children’s Research Hospital at stjude.org.

The family of Mr. Gerald "Jerry" Dodd Brister created this Life Tributes page to make it easy to share your memories.

Send flowers to the Brister family.